Hello and welcome to my creative world, thank you dearly for your interest in my artistic endeavors.

“Here on my web log I record my studio progress, it acts as a web based journal spanning back to 2010, here I can easily glance back at projects and artworks and add my current progress. I hope some of you will also find inspiration here.
I welcome dearly your comments and feedback as valuable assets that help me consider different aspects of my art practice and my creative growth as an artist.
Love and Light”
Harriet ❤

Get in touch!
I’m continuously open to participation in new projects, collaborations, murals and exhibitions.
I’m always happy to talk about a special commission piece of jewellery, your fantasy artwork or portrait of a loved one.
You can contact me via my facebook page or website and online shop at www.myfanwynia.com , much of my older work is also view-able there.


A recent project I’m working on at the moment is a curatorial one, here in Co. Leitrim where I live. The upset is an exhibition about the environment and some of the upset experienced by people in Ireland steaming from environmental decisions being made by our government. Leitrim is currently in some trouble, a large scale gas extraction project is planned here. The process known as 'Fracking' involves highly carcinogenic chemicals mixed with water, that are then pumped low down into the ground to cause cracks to release natural gas trapped in the shale rock.

The process leads to water and air pollution on a massive scale and this is not just an issue that will affect us here in Leitrim, Lough Allen is the first lake on the river Shannon a river that runs through the whole of Ireland! Any water contamination will travel. The focus area is called the Lough Allen Basin region which includes surrounding areas Sligo, Leitrim, Cavan, Donegal, Roscommon and Fermanagh.

Globally Fracking is a highly controversial practice and has been banned in some countries including France. Locally we are very upset about this but there are still many people who seem to only care about the money such a project may attract. It reminds me of an old poem 'Bansky' once in tribute sprayed on a wall:


When the last tree is cut down,

and the last stream poisoned,

You will realize that you cannot eat money.

I had been feeling down about the prospect of the Fracking for some time now and felt I needed to do something positive and proactive to help the cause; this is what this project has really grown out of.

I contacted a local photographer Gearoid O Loingsigh a friend of the cause who introduced and screened the award winning documentary 'Gaslands' to our community here at the community centre in Balinagleeragh where I live on the shore of Lough Allen. He thought it a great Idea and has helped my thus far with the events conception, we are gathering more support of the event locally and have put out a call to artists; the response has been awesome so far. We have asked the artists submitting to include a small donation to help us fund the insurance needed for the event which is to be held in Drumshanbo in a huge empty warehouse there. We feel this is a great way to raise awareness locally, getting people together and talking.

We were however concerned about calling the event an anti-fracking show in case we came up against opposition from those with vested interest in the Fracking project going through, this was taken on advice from some people who made it seem all very cloak and dagger.

So the show is themed 'the environment' and submissions have been diverse some of the other issues include work made to comment on the 'ghost' estates and buildings half finished and empty scattered over the landscape in Ireland. I think it’s interesting how people approach the theme the environment; we have also had submissions just of artistic tributes to nature’s wonders.

Here is the full information about the event:

Call For Art - The Upset

We are communally organizing an arts event for 29th of June 2012 for 1 week into July with an environmental theme, entitled 'The Upset - our awareness and the freedom to express it'

We want to activate artists across Ireland in a response to environmental concerns and draw attention to the crossroads we as a nation are at in regards to our political decisions.

The exhibition is to be hosted in the town of Drumshanbo in Co. Leitrim, Ireland. A town on the shore of the legendary Lough Allen. An area that in a recent upset has been the focus of a large scale gas extraction project.

Our goal is to motivate environmental activism through art or any other medium.

We have 100ft of wall space to fill, and are interested in hearing from anyone who is interested in getting involved in this motion.

Your involvement maybe a submission of art in any medium including visual art, film, poetry, writing, dance/performance or music.
We are also interested in hearing from volunteers who would like to support this motion and get involved in other ways, all suggestions very welcome.

We have an opportunity to start something here that can bring many minority voiceless groups together all under the one roof. Art as a way in to the conversation.

Please email us at: the_upset_leitrim@hotmail. com for an application form for arts submissions or to discuss your ideas for involvement.

The deadline for submissions is now extended to the 15th of June!

Please help spread the word by inviting everybody you think may be interested in taking part. 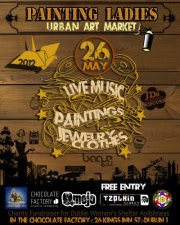 On the 26th of May I will be in Dublin taking part at 'Painting Ladies' a one day art market with an emphasis on urban and street culture made by women. There will be fantastic stalls by individual artists showcasing art, music, jewelry, cup cakes, furniture, photography, crafts, greeting cards, theartre and short films.
If you are around Dublin on the 26th do pop by, I will be displaying a range of my handmade Jewlrery, fashion accessories, original artwork and prints.
The event is raising money for 'The Woman's Shelter Aoibhneas' Dublin.
There will be a designated music area with artists including Baque Soul Band, Dj Mojo, Dj Niamh ni Shuilleabhain and Princess Siwela.
The venue hosting this event is called The Chocolate Factory, a four-storey warehouse that will be opening officially this summer. It will be a restaurant and hostel, as well as a creative space for artists to use as a venue and studio. It is located on Kings Inns Street, around the corner from Cineworld on Parnell Street. 'Painting Ladies' will take place on the ground floor.
Click here to visit 'Painted Ladies' event page on Facebook!
Posted by Harriet Myfanwy Nia Tahany at 17:45:00 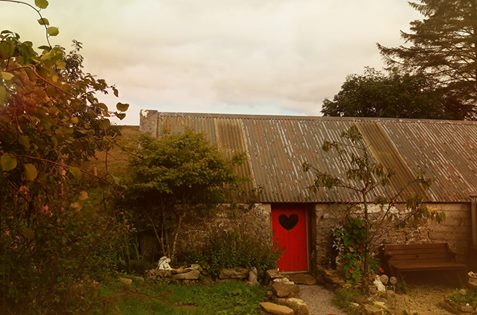 Harriet Myfanwy Nia Tahany
My artwork is mainly narrative based featuring feminine characters. I think of myself as a multi-disciplinary artist, my approaches are often diverse, the works like myself are ever changing and developing, I am yet to have found a definitive style. There is however an evident evolution in my work and at times a deconstruction, the work is personal underneath the formal explored themes, ideas and inspirations they contain. The artwork becomes an energy container that acts as a personal archive of memory, a recording of some emotive expression of myself at an early time when the work was new. Looking at older work is a way to reflect on myself. Making art for me is fun and sometimes challenging, a centering meditation and adventure into my imagination, reuniting fragments of thought, de-cluttering my mind and heart by releasing those things I struggle to express in any other way.